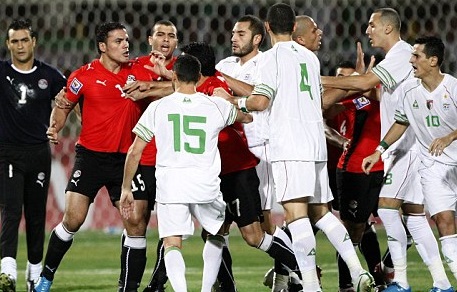 Forget Thierry Henry’s handball and the three Eurozone qualifiers, the 2009 world cup qualifier between Egypt and Algeria was the real story.

The previous Saturday, Egypt beat Algeria 2-0 in Cairo (the second and decisive goal came 5 minutes into injury time to cause further controversy). This meant that the two teams finished totally level on points, goal difference and head-to-head results.

Meaning they had to play again in Wednesday nights winner takes all play-off at a neutral ground in Khartoum.

To say we get carried away with things in the UK when the likes of Celtic and Rangers clash or Liverpool play Manchester United would be a fair comment. We think that these sort of games bring out the worst in certain elements of our society.

To compare these such games with Wednesday night’s fixture between these two North African states would be laughable.

For a start on the Thursday before the first game in Cairo, Algeria’s team bus was heavily stoned on the way to their team hotel in Cairo, resulting in injuries to three of the Algerian squad.

There was then trouble in both countries’ capitals, Cairo and Algiers after Saturdays match. And troops were deployed in Cairo to protect Algerian fans and their players and officials.

The 2009 Qualifier Between Algeria and Egypt Also Caused Diplomatic Rows

There was also a diplomatic row after the game, after a series of attacks on Egyptian businesses in Algiers. Egyptian Foreign Minister Ahmed Abul Gheit felt the need to issue strongly worded comments towards the Algerian government.

In wasn’t just in the two participating countries were all the trouble took place. In Marseille over 500 police had to be deployed to try and calm violence that erupted in the View Port area after Egypt’s second goal went in. Violence that seen shop windows smashed and boats set alight, resulting in two sinking.

Marseille has a strong North African community living there. When in the City for England’s game in the 1998 World Cup, I recall they were not afraid to come out and make their presence felt.

The bitterness between the two teams goes back a long way and there has been serious trouble in the past.

Back in 1989, Algerian Lakhdar Belloumi ‘bottled’ the Egyptian team doctor. This left him blind in one eye, and an Interpol arrest warrant was issued against Belloumi for the attack. Makes the Alex Ferguson pizza throwing incident look fairly futile.

Anyway, onto the actual football. After 90 minutes on Wednesday night, with 15,000 Sudanese riot police on stand by, Algeria finally put the issue to bed with a 1-0 win with a goal. Centre-back, Antar Yahia settled it in the 39th minute, and that was that.

When you are football betting it is important to get a number of things right.

To start with you need to make sure you are using one of the best football betting sites.

A decent football betting site will have competitive odds, a decent sign up offer, and good offers for existing customers. These offers should be things like money back specials when your bet loses. They could be free games also.

The football betting site also needs to suit your gambling needs. There is no point going with bookmaker that doesn’t offer some of the markets you like betting on.

Picking a decent bookmaker can be a painstaking task. Do they offer the wide range of football betting markets you are looking for?

Do they have a decent new customers offer? And what about offers for existing customers?

These are all important component when you are looking to find the best football betting sites.

Luckily, we have put together a page of the best football betting sites. Meaning you don’t have to trawl the internet to find them.