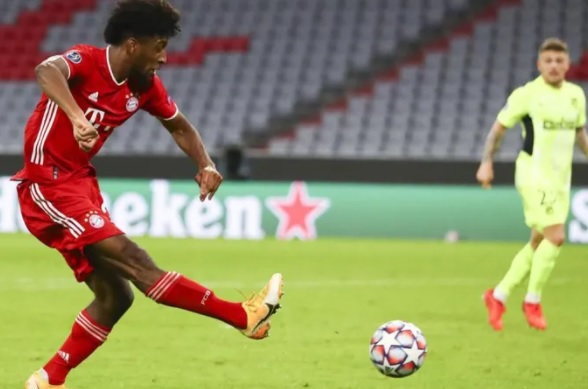 The Champions League returned with a bang this week, and the big headlines and sports news story from Matchday 1 is that Bayern Munich are still the team to beat.

The other major headline news story from the week’s action was Shakhtar Donetsk, who completed a stunning 3-2 win over Real Madrid in Spain.

But it was defending champions Bayern Munich who made the biggest statement.

In all honesty, it was no major surprise to see that Bayern Munich were the main story in the latest sports news of today – their 4-0 demolition job on Atletico Madrid was one of the lead headlines as the lives scores flowed in.

The German champions are just peerless at the moment. Atletico Madrid are one of the grittiest and hardest sides in Europe to break down, and Munich effortlessly crushed them.

I think it would be fair to say the 4-0 scoreline was almost flattering to the Spaniards.

Another headline act today was Manchester City. The Citizens got off to a bad start to Porto, going behind in the 14th minute.

Without the services of Kevin de Bruyne, it could have turned into another one ‘of those nights’ for City. But in fairness they fought back well, and in the end ran out easy 3-1 winners.

2019 Champions League winners Liverpool kept themselves out of the headlines for once. Klopp’s team had a quiet night, notching up a regulation 1-0 win over Ajax in Amsterdam.

With the incident involving Virgil van Dijk dominating the sports news headlines over the weekend, Klopp will be relieved to have had a quiet night!

Shock of the fixtures today was Shakhtar Donetsk’s 3-2 win over Real Madrid in Spain. In fact it was the headline result of the whole Champions League week.

Madrid were awful, and manager Zinedine Zidane’s team selection also has to be called into question.

Real face Barcelona this coming weekend, and Zidane clearly had one eye on that match judging by his team selection.

Shakhtar completely outplayed Madrid in the 1st half, and went into the break 3-0 up.

Los Blancos did rally and pull things back to 3-2 in the second period, but that damage had already been done. And even at 3-1, and again at 3-2, Shakhtar missed glorious chances to put the game to bed.

That all seemed to come back to haunt the Ukrainians, when in stoppage time Madrid fired in what they thought to be a late equaliser.

But after a VAR check, the strike by Federico Valverde was correctly ruled out for off side.

This defeat comes on the back of a 1-0 defeat to newly promoted Cadiz on Saturday. Another reversal for Madrid in El Clasico this weekend, will see coach Zidane come under a bit of pressure.