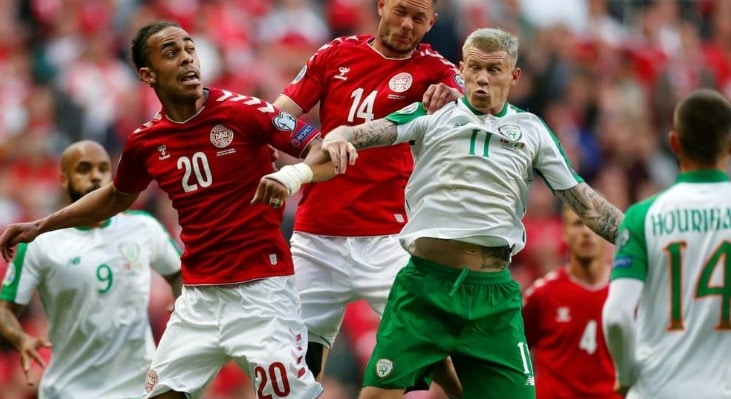 Despite it not been a classic, the 0-0 draw between Denmark and Republic of Ireland in Copenhagen last night made for compelling viewing.

Although being all square on paper, and the Irish having home advantage to look forward to, the Danes are still favourites to qualify for the World Cup at 14/19 with Betfair.

Republic of Ireland a best price of 13/10 with Boylesports.

All square in Copenhagen. It all comes down to Tuesday night in Dublin for a place at the FIFA World Cup. #COYBIG pic.twitter.com/wJ8D8kD4Qu

From Martin O’Neill’s perspective, it was the sort of performance I imagine he wanted. Similar in style to the 1-0 win over Wales to get to the play-offs by Ireland. Except this time there was no goal on the break.

A goal on the break in this match would have been vital, with away goals counting after 90 minutes in the 2nd leg.

With Ireland not renowned for their goal scoring, they know that a clean sheet at the Aviva Stadium on Tuesday is all but imperative to their chances of making it to Russia.

90 minutes betting on Tuesday is very tight as well. A Denmark win is just favourite at 15/8 with Paddy Power. The Irish bookmaker also have the best price on the draw at 21/10, with Ireland at 6/4.

While 0-0 away to Denmark seems a decent result in general, I’m not so sure it was. The 0-0 draw means just one goal by Denmark on Tuesday, and Ireland will need two goals in 90 minutes.

A sobering thought for the Irish fans, and is probably why the Danes remain the favourites.

Ireland also don’t concede many, and I don’t expect to see Martin O’Neill changing his tactics much despite being at home. I imagine they will sit tight, and hope to catch the Danes on the break, or from a set piece.

I think Under 1.5 Goals has a more than decent chance here, although the odds will be tight. This is also a match that I wouldn’t be surprised to see go to Penalties.