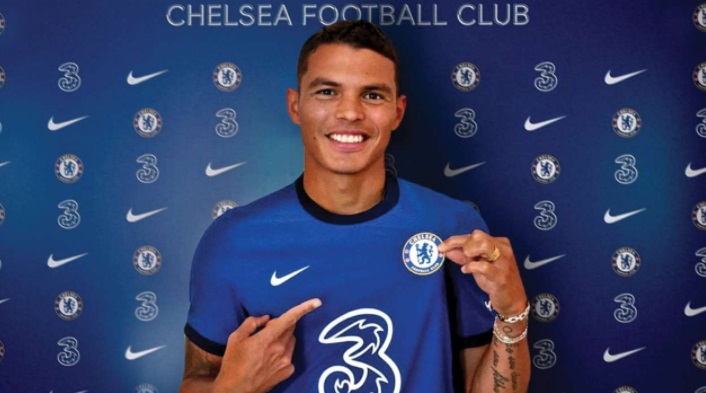 The signings at Chelsea continue as Thiago Silva signs from PSG, the day after Malang Sarr joins from Nice.

Chelsea’s summer spending spree continued today with the news that Thiago Silva has joined the Blues from PSG.

It’s been a busy week at the Bridge, and Silva’s signing follows that of Ben Chilwell and Malang Sarr.

The club announced on their website on Thursday that defender Thiago Silva had joined the club on a 12 month dea with the option of a further one year.

The 35 year old Silva will bring some much needed experience and know how to the Chelsea back line. A regular for Brazil, Silva has previously played for AC Milan, before his move to the French capital.

It’s clearly a short term basis signing, but things needed to improve at the back at Chelsea.

Silva’s last game for PSG was the 1-0 Champions League defeat to Bayern Munich last Sunday. The transfer brings to an end an illustrious career in Paris, that seen him win 7 Ligue 1 titles, and numerous cups in the French capital.

The one thing to have eluded Silva during his time in Paris was European glory.

Also signing for Chelsea this week was young French defender, Malang Sarr. The 21 year old left Nice on a free transfer and joined Chelsea on a 5 year deal.

Sarr has represented France at youth levels, but has yet to play a full international. He also qualifies to play for Senegal through his parents.

Sarr is one for the future, with the club initially planning to send him out on loan.

How much did Thiago Silva cost Chelsea to buy?

Thiago Silva joined Chelsea from PSG on a free transfer. At the age of 35, Silva was out of contract and able to leave PSG for nothing.