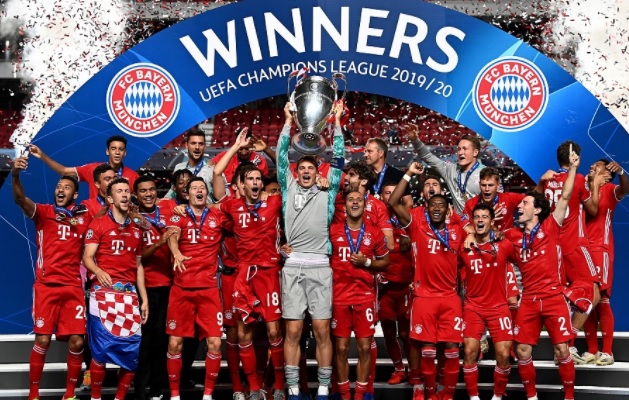 Bayern Munich are European Champions after beating PSG 1-0 in the 2020 Champions League final in Lisbon on Sunday night.

Kingsley Coman – the former PSG player – scored the decisive goal in the 59th minute, converting a Joshua Kimmich cross for the only goal of the game.

For PSG, the agonising wait goes on. Their big name players performed well to get them to the final, but on the night they fell just short.

While the match might have failed to live up to expectations when it came to goals, it was still an enthralling watch.

The 1-0 scoreline ensured the game was in the balance right until the death. But ultimately, it was the Germans who had just that little bit extra needed when it came to the business end of the competition.

The 1-0 win for Bayern caps an amazing turnaround in fortune, and completed an outstanding first season in charge for coach, Hansi Flick.

The former Germany assistant coach only took over from the sacked Niko Kovac in November, following a 5-1 hammering by Eintracht Frankfurt.

At the time Munich were 4th in the Bundesliga, and the team was in total disarray.

What has happened since at Munich has been nothing short of astonishing.

Even by the standards of a successful club like Bayern.

Flick can do no wrong

For coach Hansi Flick, it seems he can do no wrong.

It’s fair to say one or two eyebrows were raised when the team was announced and Ivan Perisic had been left out by Flick.

It was a big call. Perisic had done nothing wrong, and even scored the second goal in the 8-2 win over Barcelona in the semi-final.

And what happens? The man brought in by Flick to replace Perisic, Kingsley Coman, goes on to score the winner.

At the moment everything Flick touches, seems to be turning to gold.

Another man who had an outstanding night was Munich keeper, Manuel Neuer.

The giant shot stopper put in a commanding display, and looked as assured as ever.

The captain must have seemed like an unmovable object to the PSG players.

Not only was his handling first class, he also showed how technically accomplished he is by saving well with his feet on two occasions.

Neuer’s performance prompted veteran striker Thomas Muller to say he is the number 1 keeper in the world.

Former Bayern and Germany keeper, Oliver Kahn, also added that Neuer is the country’s greatest-ever player in the goalkeeping position.

The star men never turned up for PSG

The French champions can’t be accused of not turning up on the night.

PSG had enough chances, but fell short due to a combination of Manuel Neuer, and some poor finishing.

Despite improving in every game up to the final, Brazilian superstar Neymar couldn’t find that extra special piece of magic required on such a big night.

Fellow striker Kylian Mbappe had a night to forget as well.

The young French striker didn’t properly get hold of a great chance at the end of the 1st half, and in truth, he never really got going at all.

It’s on such big occasions you need that special piece of magic from your star performers. And on this occasion, unfortunately for PSG, it was missing.

Tuchel preferred to focus on the positives

Coach Thomas Tuchel was surprisingly upbeat in his after match interview, refusing to be too disheartened.

Tuchel focused on the positives of how well his team had done to reach the final.

He was also very philosophical that it was just the quality in finishing that was the difference between the two sides. A view that was hard to disagree with.

It’s amazing to think that Tuchel went from been 5 minutes from the sack when his side were 1-0 down to Atalanta in the quarter-finals, to almost winning the Champions League.

Where was the 2020 Champions League final played?

There were no fans in attendance due to the Covid-19 outbreak, and the restrictions placed on sporting events in the aftermath.

The match was originally due to be played in Istanbal’s Atatürk Olympic Stadium on 30th May.

There was high praise indeed on social media from across the world for Munich’s sixth Champions League triumph.