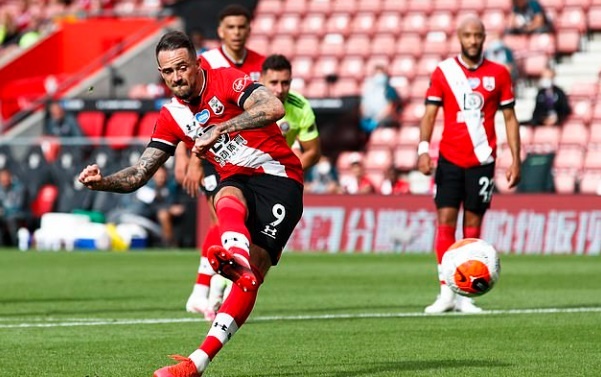 It’s Aston Villa V Southampton on Sunday (1/11/20), and in my football betting prediction for this one, I’m expecting the Saints to throw a further spanner in the Villa works.

Dean Smith’s Aston Villa suffered their first set back of the season with their 3-0 defeat to Leeds at Villa Park on Matchweek 6.

On the same weekend, Ralf Hasenhüttl’s Southampton side brought Everton’s unbeaten start to an end, with a 2-0 win at Saint Mary’s Stadium.

Villa are averaging 2.6 chances per a match, compared to Southampton’s 0.67. Despite this, the Saints average 1.67 goals a match, with Villa at 2.4 goals a match.

The smaller gap in chances created to goals scored in Southampton’s stats, suggests the Saints are better in front of goal than the Villains.

This is probably down in part to Danny Ings. The Southampton striker has 4 goals this season, resulting in bookmakers making him odds on (10/11) to score anytime.

The football betting odds are predicting a close match here, so for this reason I wouldn’t be against going for a goals bet. Personally, I have a different theory on this match, based more on gut instinct, that statistics.

I can see Southampton upsetting the odds at Villa Park again today, and for this reason I’m taking a bit of a slightly more risky punt, but one that comes with decent reward.

Tip – Southampton and The Draw in Double Chance and Danny Ings to score anytime in Same Game Multi @ 2.48 with Betfair

I’m going with Southampton and the draw (1/2) in Double Chance betting, along with Danny Ings to score anytime (10/11).

Danny Ings didn’t manage to find the net in the 2-0 win over Everton, and its rare the striker goes two matches without a goal.

Just for good measure, he did get an assist on both the Southampton goals that day.

And I can see Ings and Southampton having another decent day here.