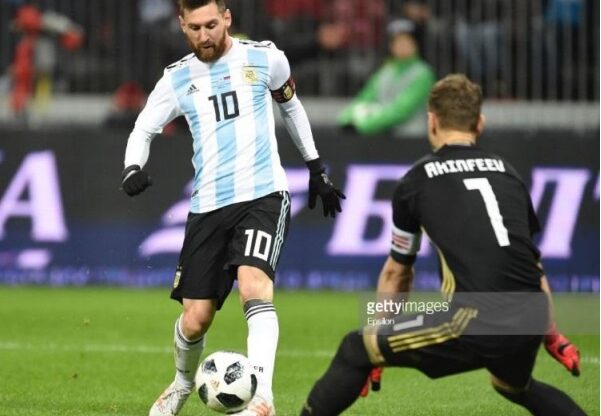 Russia and Saudi Arabia will be getting the 2018 World Cup started – let the action begin!

A match between the two lowest ranked sides in the tournament may not seem like the ideal curtain raiser for this year’s World Cup. But in Russia and Saudi Arabia, you have two sides who have a lot to prove.

They kick off a month of footballing action when they face each other on Thursday 14th June at Luzhniki Stadium in Moscow.

Both sides expected to find their other group matches against Uruguay and Egypt exceptionally tough. Meaning this match represents their best chance of picking up three points.

Excluding their time as the Soviet Union, this is just the fourth time Russia have ever qualified for the World Cup. They are yet to make it past the group stages.

Of course hosting the tournament meant automatic qualification. But it also means Russia have won just one competitive game since 2015, if you count their victory over New Zealand in last year’s Confederations Cup.

Despite being on home soil, expectations for the hosts are still low. Manager Stanislav Cherchesov, who was appointed after Russia finished bottom of their group in Euro 2016, has won just five of the twenty games he has been in charge for.

The former international goalkeeper led Polish side Legia Warsaw to the league and cup double before taking the national team job.

But he has found that winning mentality hard to come by with Russia,. Especially with so few games to play and the vast majority of those being laboured friendlies.

Can the Russians finally make the second round?

If Russia are to delight their home support and reach the second round of the tournament for the first time ever, a win against Saudi Arabia is a must. They do have some talented attackers in their squad but it is at the back where they could struggle, despite being a defensive based side.

They have included veteran centre back Sergei Ignashevich who will turn 39 on the eve of the World Cup final.

At least behind him they will have one of the tournament’s most experienced goalkeepers in the form of Igor Akinfeev.

Russia’s captain has been a fixture between the sticks for CSKA Moscow and Russia for over 13 years now. And he is still one of the country’s key players.

We look at how every host nation has fared at World Cups – and why history
suggests Russia could surprise this summer: https://t.co/8GYDYKfBQu | @p_smith86 pic.twitter.com/kgGl5zBg3I

Further forward, Cherchesov’s squad boasts one of the joint top scorers from Euro 2012. Alan Dzagoev scored three in the Euros six years ago but a move to one of Europe’s top leagues has never materialised.

Despite that, the 27-year-old play maker is still a key man for Russia. He was involved in fifteen goals for his club CSKA Moscow this season. He is expected to provide the link between midfield and attack for the Russians.

Can Smolov repeat his club form for his country?

Up top, Fyodor Smolov is enjoying the best spell of his career. A late bloomer, the 28-year-old made his national team debut in 2012 but it is only in the past three seasons that he has finally reached his potential.

After signing for Krasnodar in 2015, Smolov has fired an impressive 63 goals in less than 100 club games.

He also has six goals in his last 12 internationals. This comes after only managing to score four goals in 77 appearances for his first club, Dynamo Moscow. If you fancy Smolov to fire Russia to glory, you can have a bet on football.

Saudi Arabia will have low expectations

Saudi Arabia are heading to their fifth World Cup as the second lowest ranked side in the tournament. They sit just three places above Russia in 67th.

The Green Falcons beat Australia to automatic qualification for Russia in the third round of the Asian qualifiers. Since then they have changed their manager twice.

Bert van Marwijk was the man who guided Saudi Arabia through the qualification process but he will lead Australia to the World Cup.

After the Dutchman’s exit, former Argentina manager Edgardo Bauza took over but he lasted just two months. He was replaced by the man who won the 2016 Copa America in charge of Chile, Juan Antonio Pizzi.

Despite their recent coaching shenanigans, Saudi Arabia had an impressive qualification campaign and boasted the joint top scorer in Mohammad Al-Sahlawi.

The 31-year-old, who has spent his entire career in his homeland. He has scored an astonishing 16 goals in qualifiers, and now has 28 goals in 39 caps for his country.

Earlier this year, he spent three weeks training with Manchester United in order to prepare for the World Cup and he is certainly his side’s biggest goal threat this summer.

In midfield there is Salem Al-Dawsari, a talented winger who played in this season’s La Liga. The 26-year-old was one of nine Saudi players who joined Spanish clubs on loan in January following a deal between the two countries’ FAs.

Al-Dawsari joined Villarreal and despite making only one substitute appearance for the club, it was a memorable one. The club were trailing 2-0 against Real Madrid, when, in the 57th minute, Al-Dawsari came on for Javi Fuego. Villarreal managed to score to goals to secure a 2-2 draw.

Their opening match is also as equally important for them as it is for the hosts as they look to make it out of the group stages for the first time since their World Cup debut in 1994.

Anything other than a win against Russia will see the odds of them repeating this feat stacked against them.

They will be hoping their experience can guide them to victory with just two players under the age of 25 in a squad which includes two players with over 130 caps.

It is unlikely that this clash between two sides favoured for an early exit will go down as a World Cup classic. But that doesn’t mean this game will be forgotten easily.

To the fans of the two sides, it is the culmination of years of hard work. For the Saudi fans, their qualification campaign to reach this stage started almost exactly three years ago.

While for the Russians, they have been looking forward to this tournament ever since FIFA awarded them the right to host in 2010. Don’t write off these two sides from making an impact this summer just yet.