El Clásico is one of the biggest fixtures in European football, never mind Spain. As a result, there is usually plenty of new customer offers floating around.

Bookmakers like Coral, Betfair, Paddy Power and 888Sport, regularly offer enhanced odds or money back specials on the match.

Here we will be bringing you these offers, so keep this page bookmarked and make sure you get the best new customer offers on El Clásico.

What Is El Clásico?

The name El Clásico is given to matches between Spanish rivals, Real Madrid and Barcelona. The two teams play each other twice every La Liga season. Once at Mardrid's ground, and once in Barcelona.

These days the phrase seems to get used (for commercial reasons) if the two sides meet in any competition. This could be in the Champions League, or Copa del Ray, etc. I guess you'd probably hear it if the two clubs played tiddlywinks. 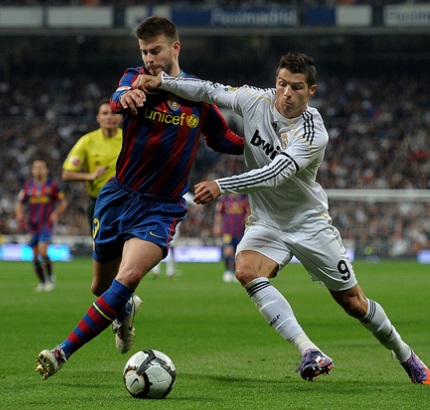 The match also takes on extra significance due to political reasons. Barcelona is the capital of Catalonia, and is the main home of the Catalan Independence movement.

This puts them in direct conflict with the Spanish government, in Madrid. In matches in the Spanish capital, Madrid fans can be seen waving the Spanish national flag to taunt the Catalans.

La Liga can often be a close two horse race between Real and Barcelona. This often means the two matches can also decide the league title.

It is possible to spread bet on matches involving Real Madrid and Barcelona. Popular spread betting firm Sporting Index has various markets available on the match.

UP TO £100 IN FREE BETS FOR FOOTBALL BETTING FROM BETFAIR