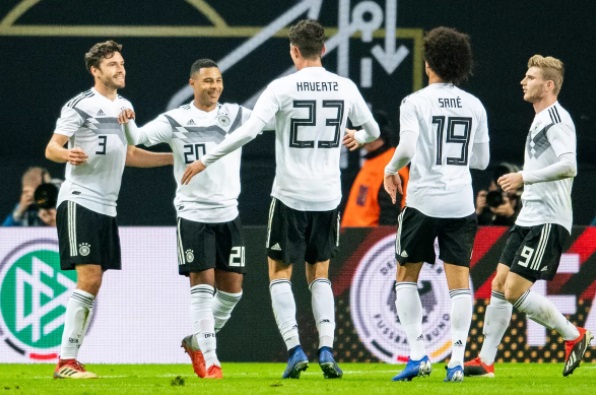 The big match in the Nations League tonight (17/11/20) is Spain V Germany, and in my football betting preview and prediction, I’m predicting the Germans won’t get beat.

There is a clear picture to deciding the outcome of League A Group 4 of the Nations League. Spain need a win to progress, while the Germans only need to avoid defeat.

So no matter what the outcome of this match, third placed Ukraine cannot proceed.

Both of these sides have looked far from their respective bests over recent years. Despite this, they are still two of the dominant forces in Europe.

The sides drew 1-1 in the reverse fixture

In the reverse fixture back at the beginning of September, the two sides drew 1-1 in Stuttgart.

If the Spanish do go onto win and progress to the knock out stages tonight, it will be in no small part down to that Gaya goal.

Spain go into this one as the bookies favourites. But like with so many of the heavyweight clashes in this international break, that’s mainly down to home advantage.

11/8 makes them warm favourites, and how often are Germany ever as big as 2/1?

With a very leaky defence, and Bayern Munich approach to attacking, Germany’s presence in this match is probably what’s driving down the odds in the goals market.

Spanish matches are traditionally tighter affairs, with a lot of passive possession.

Germany and The Draw in Double Chance + Over 1.5 Goals in Same Game Multi Bet with Betfair @ 1.89

Two of the three outcomes tonight see the Germans progress.

And although Joachim Löw’s side has struggled defensively, and also not seemed themselves at times, I can still see them having enough to not lose to a Spanish side in transition.