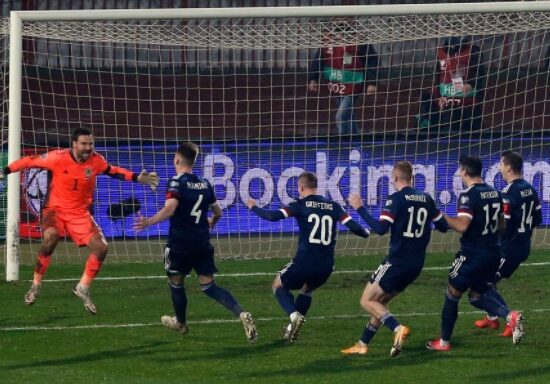 Yes, after more than 20 years worth of disappointments, Steve Clarke has led the Scottish national team to a major football competition.

Scotland’s 5-4 penalty shoot-out win over Serbia last night sees them take their place in the next summer’s delayed Euro 2020.

They now line up in Group D, alongside old rivals England, Croatia, and Czech Republic.

A whole generation of Scotland fans have never experienced this before

This will be the first time Scotland will play in a major tournament since the 1998 World Cup finals, held in France.

A whole generation of people in Scotland will never have experienced this, and now it’s finally going to happen.

How it all unfolded

Whoever’s idea it was to come up with the Nations League, is probably nearly as popular in Scotland today, as David Marshall is.

Yes, it can be regarded as a route via the back door, or a second chance. But is anybody in Scotland going to be concerned about that today?

Not a bit, and why would they be!

In their Euro 2020 qualifying group, Scotland finished 3rd, just outside the qualifying places.

It was a distant 3rd though, a huge 9 points behind 2nd placed Russia, and 15 points behind group winners Belgium (ok, they did win 10 from 10).

Prior to failing to qualify automatically for Euro 2020, Scotland won their 2018/19 Nations League group. Winning an impressive 3 out of 4 matches.

Winning the Nations League got the Scots into play-offs for one of the 4 remaining spots at Euro 2020.

First up was Israel, who Scotland defeated on penalties at Hampden Park in October. That victory took Steve Clarke’s men into last night’s winner takes all encounter with Serbia.

On the night I thought Scotland were magnificent. Maybe they were helped a little by the absence of a hostile home crowd, but even so, to go away to Serbia and get a result is impressive.

And it wasn’t a lucky result, it was completely deserved. Scotland were the better side across the 90 minutes, and really should have had the game put to bed well before Luka Jovic equalised in the 90th minute.

In fairness, I thought the Scots held on a bit in extra-time. They had rightly made a defensive substitution in the 87th minute, to try and see out the 1-0 win, meaning in extra-time, Serbia had the momentum.

Despite this, Scotland more than held their own, and keeper David Marshall only really had one save of note to make.

In fact penalty aside, his save from Nemanja Gudelj in extra-time was probably Marshall’s only real action of the night.

And what of the penalties? Well, I thought all 5 of Scotland’s were top class, as were some of Serbia’s.

But in the final act of the night, up stepped Aleksandar Mitrovic, needing to score to take the shoot out into sudden death…….. and David Marshall did the rest.

It was probably typical of the Fulham strikers luck of late, to be honest.

Goalkeeper David Marshall, and goalscorer Ryan Christie, will take all the plaudits for obvious reasons. But I, along with plenty of others, was mightily impressed with the performance of Lyndon Dykes up front.

The QPR striker rightfully was praised for his all round performance against the physical Serbs. He took all the punishment dished out, and still came back for more.

Not only did he match up physically, he also looked technically excellent on the ball, and is clearly a guy with a lot of talent.

His hold up play, and all round willingness to put in a shift for the team, was rightfully picked up on by Sky Sports pundit, Darren Fletcher, who heaped praise on the 25 year old striker.

While Fletcher’s assertion that Dykes could easily play in the Premier League may be true, it might not go down well with the QPR fans.

What awaits Scotland at Euro 2020 this summer?

Scotland have two dates at Hampden Park, and one at Wembley, when Euro 2020 finally gets under way in the summer of 2021.

With the top 2 from each group, and the 4 best 3rd place finishers, all going through to the next round, there is a genuine chance that Scotland could make it through to the Round of 16.

So Steve Clarke will be well aware that 3 points from that match, and a draw against one of England or Croatia, might well be enough to see his team progress.

Maybe a more realistic bet could be on Scotland getting out of their group, where you can get 5/4.

To Qualify From Group D Betting

Those odds put Scotland fourth overall in Group D betting, which I find slightly surprising, given they seem to be an improving side, and they also have the upper hand over Czech Republic of late.

Don’t be surprised to see those odds change, with the Scots and Czechs flip flopping in the lead up to the tournament.