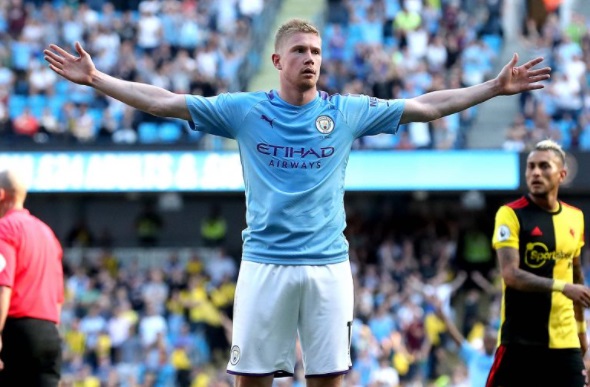 It’s Manchester City v Olympiakos from the Etihad on Tuesday (3/11/20), and in my preview, my prediction is a win for City, but a starring role for Kevin de Bruyne.

Solskjaer lives to fight another day for United

Why it’s becoming more interesting to bet on the Premier League.

What is realistic for Everton to achieve this season?

Betway and its sports betting bonuses

What kind of football promos can you find on Betfair?

The football betting promos of MELbet

What is going wrong at Man Utd?

Shambles at the Etihad as Leicester thrash Manchester City 5-2

Are Real Madrid really justified to be odds on for back to back La Liga titles?

What To Expect in Football Before 2020 Ends

Fans Exciting for Football Competitions in 2021

2020 Champions League Semi-Finals Round Up

All season I feel like I’ve been waiting for Man City to get going, and so far, something just seems missing – probably an out-and-out striker to be honest!

In the Premier League of late City seem to have been stumbling along. They seem to be both stuttering to draws, and grinding out tight wins by the odd goal.

For all his work rate and talent, Raheem Sterling just doesn’t seem right.

Could the fact that Pep’s team are clearly missing a top class striker up front be piling extra pressure on Sterling and affecting his performance? Quite possibly.

But on a positive note, they do have star midfielder Kevin de Bruyne back, and judging by his showing against Sheffield United last weekend, he’s now getting back to somewhere near his best form.

Bizarrely, in the Champions League, City haven’t struggled for goals. So far they have 6 goals from their 2 matches.

While in the Premier League they have scored just 9 goals in 6 matches, very un-City-like.

City’s opponents, Olympiakos, will definitely see Group C as one they can qualify from. So far they have beaten Marseille 1-0 on Matchday 1, and lost 2-0 away to Porto on Matchday 2.

Domestically, they sit second in the Greek Super League after 5 matches. They have won 4 and drawn 1 of their 5 fixtures to date.

I fully expect City to win this one, although there’s clearly little value at 1/5.

In last week’s Champions League, that would have won, but on Premier League form, I can’t be backing that.

The value is in backing City to win, and not to score many goals. And that is a risky strategy in my view.

As bad as City have been in front of goal lately, we all know they are going to hammer somebody soon.

Prediction – City to win and Kevin de Bruyne to have 2+ shots on target in a Same Game Multi bet @ 2.46 with Betfair

As I alluded too earlier, Kevin de Bruyne seems to be returning to form. With this in mind I’m going to add de Bruyne to have 2+ shots on target at 11/10 into my bet.

The Belgium midfielder will take the majority of the free kicks, and will also be on spot kick duty.