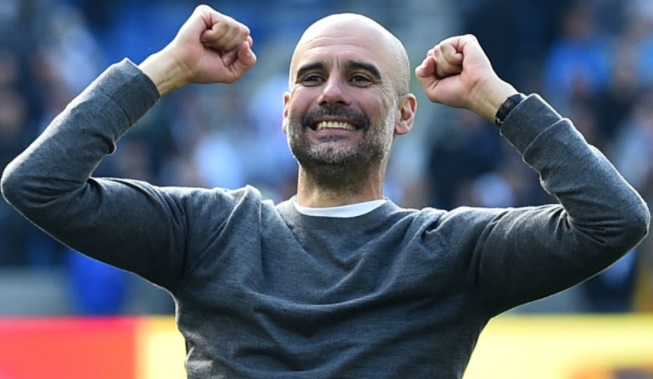 Yes, given the late end to last season, it seems strange to be starting again so soon. But thanks to the unwelcome intervention from Covid-19, this is where we find ourselves.

Liverpool were the deserved Premier League winners last season, but can they do it again?

The latest football betting suggests they can, but it will be a tough ask.

Klopp’s Reds are currently second favourites to win the Premier League. They are Even money, just behind Pep’s Manchester City team in the betting, who are 8/11 favourites.

The bookmakers seem to believe it will be a close run thing, and so do I. But this year I believe Manchester City will shade it, and this is where I’ll start my 2020/21 Premier League predictions.

The first reason is history. Look at the points totals for both City and Liverpool across the past 3 seasons:-

Working on the theory that it’s going to take 90 plus points to win the league, can Liverpool get more than 90 points three seasons running?

It’s been previously said that Pep’s team of 2017 to 2019 is the best ever Premier League team in history. And they’ve not managed to get 90 plus points three seasons running.

I’m not saying it’s impossible Liverpool will get over 90 points again this season. What I’m saying is, its bloody difficult.

The chances are it might not even take 90 plus points to win the up coming Premier League title, which takes me nicely onto my next point.

Neither side finished the last campaign in the greatest of form. If that form continues, it might be the case that neither side makes the 95 points plus mark.

Liverpool weren’t as convincing after the league resumed in June. And if truth be told, their form had fallen slightly below their ridiculously high standards just before the Premier League got suspended.

The defeats to Watford and Atletico Madrid – in the Champions League – showed that.

For Manchester City, last season they never really got near the standards they set themselves the previous two seasons.

They were playing catch up to Liverpool from early on, and in hindsight they never looked like catching the Reds.

City’s biggest Achilles heel however was at the back, particularly in central defence. All season they struggled there, regularly using Fernandino as a make shift defender.

City haven’t really addressed that problem either, with Nathan Aké the only addition of note in that position.

I can see both teams struggling to reach the high 90’s this time around. But when it comes to form, I can see City improving on last season’s, while I believe Liverpool will struggle to reach the same, or similar level.

When it comes to spending, City are the dominant force. Whether that’s fair or not, is another story. But the facts are, that Manchester City have unrivalled spending power.

With a few weeks of the Transfer Window still to go, City could still go out and buy literally anyone they wish to.

If a big name player get’s injured early in the season, City can replace him up until October 5th – the date the transfer window closes.

While if the same thing happens to Liverpool, the chances are Klopp will just have to absorb it.

The City Squad has weaknesses though!

Man City also have the deeper squad – at least in my view. That said, it has plenty of weaknesses.

Sergio Aguero is getting on a bit, while David Silva hasn’t, and can’t be replaced.

Yes, Phil Foden is a good young player, but he doesn’t even play the same position.

And even if he did, he’s no where near Silva’s quality.

What happens if Kevin de Bruyne gets injured as well?

There’s holes at the back in Pep’s team. I’ve already alluded to the centre backs, and there was also no left back in sight last season.

This was said of Liverpool last season, and it proved to be no problem.

In fact, it was the exact opposite – as Liverpool lifted the Premier League trophy.

So far this summer, only Kostas Tsimikas has been signed, a Greek left back. That’s not to say Klopp won’t add to his squad before the end of the summer.

Liverpool also have Takumi Minamino, a winter transfer window signing, who should now be Premier League ready. The Japanese international has had a few months now to get settled and acclimatised.

Unlike City, Liverpool’s squad has no major weaknesses, it just lacks City’s depth. There is also fewer ageing players at Anfield.

With the exception of 34 year old James Milner, the majority of the Liverpool team is either in their prime, or approaching their prime.

This must be why Klopp doesn’t feel the need to go out and splash the cash.

When weighing all things up, there are pros and cons for both sides.

I can only see the 2020/21 Premier League winners coming from one of these two teams.

Both are capable, and both are the best equipped.

On this occasion though, I’m just going for Man City to pip Liverpool to the title. I think Pep’s men will win the Premier League with a total of around 85 to 90 points.

I’ve already predicted my top 2 of Manchester City and Liverpool, so who do I think will join them in the Top 4?

Of these two, I see Manchester United as a definite for a Top 4 finish. Ole Gunnar Solskjaer’s men just seemed to step up a notch or two in quality when Bruno Fernandes arrived.

Add into the mix the signing of Donny van de Beek, the emergence of Mason Greenwood, the coming of age of Anthony Martial, and the return to fitness of Paul Pogba, and I can only see United continuing to grow and flourish this season.

I don’t see them challenging the top 2 yet, but I can see them finishing a comfortable third in the Premier League. And that’s both with, or without Jadon Sancho.

Chelsea to finish 4th – but only just

Next comes Chelsea. Now I’m less certain about Frank Lampard’s Blues, as I’m not sure which way this will go.

Chelsea have made a considerable investment in a number of players. You could almost call it major reconstructive surgery.

Alongside Chelsea’s young emerging stars, I can see this going one of two ways.

The new signings will complement the young players and take the team to another level. Or it will be an absolute disaster!

Adding guys like Hakim Ziyech, Timo Werner, Ben Chilwell and Thiago Silva, will add experience and know how to the team, that’s for certain.

But then Kai Havertz is inexperienced, as is a lot of Chelsea’s other first team members – especially given the departures of Pedro and Willian.

Also, how are Chelsea going to play? Their style can’t suit both Werner and Olivier Giroud. Will this be a Lampard masterstroke with all bases covered? Or will it lead to confusion amongst the young squad?

I really hope it works out for Frank Lampard and his young Chelsea team, but I’m not convinced.

Can anyone else rival Chelsea for a Top 4 finish?

So why am I putting Chelsea in my Top 4 of my 2020/21 Premier League predictions you may ask?

Well the simple answer is if things get that bad, Lampard will probably get sacked and replaced by a more experienced manager.

Chelsea won’t let things drift after spending all that money.

Lampard could be gone by October or November, leaving a more experienced manager enough time to get Chelsea into the Top 4.

Another reason I’m sticking with Chelsea is because their rivals simply don’t look up to the task either.

Arsenal are a work-in-work-progress. They are showing signs of development under Mikel Arteta, but on the whole they are a young developing side.

I couldn’t say with any confidence that the Gunners will finish in the Top 4.

Spurs looks disjointed under Jose Mourinho. How long will it be before Jose implodes again?

And will he be able to work without a cheque book? These all raise doubts for me.

And what of the others? Wolves have already lost Matt Doherty, and who knows who else could follow him out of the door.

Leicester have also been weakened, and I can’t see Everton or Sheffield United sustaining a challenge.

Despite how well last season went, the Blades would be better off focusing on staying up in my opinion.

Which nicely leads me onto my predictions for relegation from the Premier League for the 2020/21 season.

The bookmakers seem adamant that Leeds United won’t be making an immediate return the the Championship.

They are currently 4/1, that’s ahead of the likes of Burnley and Newcastle, in the betting.

The three favourites for the drop from the Premier League are Fulham, West Brom, and Aston Villa.

I am pretty confident that two of the three favourites will go down, as in Fulham and West Brom.

I was tempted to go for all three of the promoted teams to go straight back down, but I’m going to resist.

Maybe I’m getting a bit carried away by the Leeds United bandwagon as well.

I think Burnley could well be down there flirting with relegation as well, but I’m going to assume that their Premier League experience will be enough to save them.

That said, something doesn’t seem right at Turf Moor.

There have rumblings of discontent, and stories that manager Sean Dyche is unhappy with the club letting experienced players like Joe Hart and Jeff Hendrick leave.

It will be interesting to see how things develop at Burnley this season.

Moving on, and although the likes of Crystal Palace and West Ham are always in the betting mix, I think they will be okay.

Also surviving this season – in my view – will be Aston Villa. I believe last season’s experience will help them this term..

Newcastle United have just signed Callum Wilson, so they will probably have enough goals in them to keep themselves safe – despite his indifferent form for Bournemouth last season.

This only leaves me with Southampton, Brighton and Sheffield United to choose from.

I can’t see Southampton going down, they are too good, and they also have the goals of Danny Ings.

While in the run in at the end of last season, Brighton showed they have a lot of fight and some quality players.

This only leaves me with Sheffield United.

Chris Wilder’s team may have cantered to safety last season, but I believe they may well get worked out second time around.

A bit like Liverpool at the top, I can only see the Blades form heading one way – downwards.

And I believe the drop off in performances could be that big, that it may well send them down.