Spurs take on Manchester United at Wembley this weekend, and 888Sport have a great new customers offer on this match. New customers can get enhanced odds of 10/1 on a Spurs victory, and 20/1 on United to win. 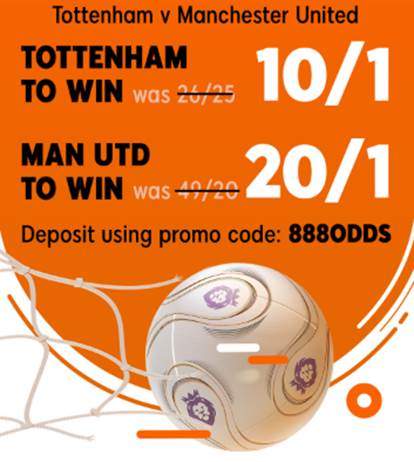 Our enhanced odds offers for new customers page has even more offers on the weekend's football.

Spurs' have been in good form lately, with the 3-1 home defeat to Wolves their only defeat in their last 7 league matches. They won the other six.

United have also been red hot Jose Mourinho departed. They have won 4 from 4 in the Premier League under Ole Gunnar Solskjaer, although the opponents haven't been top of the table material.

This will be the real true test of Solskjaer's short reign to date. A win here really would underpin their recent change in form, and would also do the Norwegian's chances of landing the manager's job full time, no harm.

Despite his recent run and the fact he has been so prolific over the past few years, the Spurs and England striker has a modest record against United.

So far in his Spurs career, Kane only has 2 goals in 10 games against the men from Old Trafford.

So that may be a stat worth bearing in mind if you are thinking of backing the world cup golden boot winner. That said, he did find the net in his most recent outing against United at Old Trafford back in August, so maybe he is starting to put that record straight.