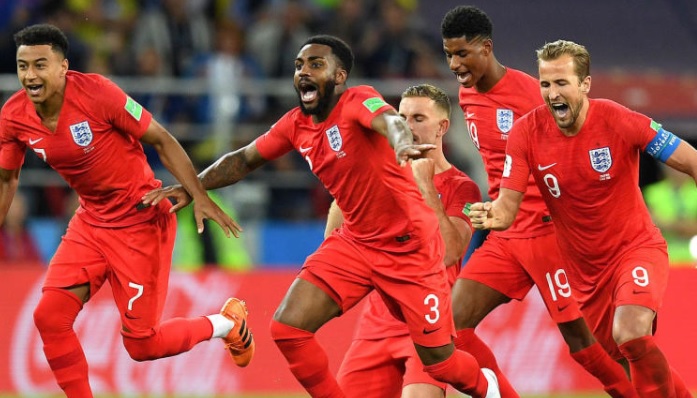 Can England really shock us all and reach the final of the 2018 World Cup? We look at their chances!

This World Cup has thrown up so many surprises that even the most experienced football tipsters will be unsure what to predict as we go into the final eight.

Nevertheless, as we catch our breath before the quarter finals, let’s try to take an objective look at how things might pan out. And where the smart money lies, as we run through the chances for the top teams.

Brazil is the only constant

It seems like months ago now, but back before all this began, Brazil were the warm favourites to win the FIFA World cup.

Now, that is the only thing in sports betting that has remained unchanged. Brazil were slow out of the gate in the group stage and looked decidedly vulnerable against both Switzerland and Costa Rica.

But as five times world cup winners, they know it doesn’t matter how you start the tournament. The Brazilians know full well it’s how you finish it.

The team looked to be hitting their straps in their wins against Serbia and Mexico. They are now at the shortest odds yet to go all the way and win their sixth World Cup. Bookmakers are quoting them at 5/2.

England favourites to join them in 2018 World Cup Final

England were always favourites to beat Colombia and make the quarters, but the manner in which they did so was far from assured.

Coming as it did off the back of a group stage loss to Belgium, it seems strange that England are now favourites to reach the final from their side of the draw.

But that says more about the bizarre nature of the draw itself and the surprises that have come along the way, than it does about anything else.

Bookies have them at even money to beat Sweden in the quarter final. And we assume that will set up a semi against Croatia – although after Russia’s treatment of Spain, anything is possible.

In the latest football betting, England are 4/1 to win the World Cup. While they certainly have an easier route to the final than they can possibly have dreamed of, it is by no means a foregone conclusion.

Either way, those odds do not look generous, and punters are likely to look elsewhere.

France in with a real chance

France will be cursing their luck to be in the top half of the draw.

This is a team that has played ugly football when it had to – check out the turgid 0-0 draw against Australia – and has also set the tournament alight in the spectacular win over Argentina.

In other words, they have done exactly what they have needed to do to progress through the tournament. This makes them a dangerous team.

A slip up against Uruguay seems highly unlikely, and a France vs Brazil quarter or semi-final could realistically decide the World Cup winners.

France is a team that is in with a real chance of beating the favourites. If they do so, you would not back anyone in the bottom half of the draw to stop them from going all the way.

That makes the 4/1 odds on offer look far more tempting than they do for England.

Some have touted Croatia as a dark horse from the word go. But like all the best dark horses, they have flown under the radar throughout the competition.

Of course there will be pressure on the Russia matchup, and but every fairy tale has an ending. And the home team’s run should end this weekend.

Croatia won’t care whether it is England or Sweden in the semi – either way they will fancy their chances. Winning the event might be a bridge too far for the Croats. But 5/1 to be a losing finalist might be the best bet on offer right now.