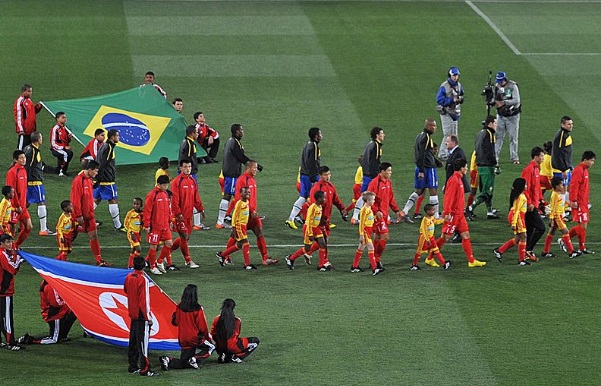 Only eight teams are left in the competition, and Brazil are again the bookmaker’s favourites to win the 2010 World Cup.

After a brief spell off the top of the market, the South American serial winners are back in charge of the betting again.

Round of 16 is now complete

The last two Round of 16 matches seen Spain and Paraguay both progress to the quarter finals.

After a brief spell for Argentina at the top of the world cup football betting, Brazil now find themselves back as the outright favourites at 5/2.

Of the 8 teams left, you would have to say that only Brazil, Spain, Argentina, Germany or Holland have a realistic chance of lifting the 2010 World Cup.

Brazil look to have the more favourable World Cup draw

The Brazilians would appear to be in the easier side of the draw. If Brazil do get past the Dutch on Friday, they will face the winner of Ghana and Uruguay for a place in yet another final.

For Ghana and the continent of Africa, what a chance they now have to reach the semi-finals of the world cup. Of the teams remaining, only Paraguay look on paper to be a better fit for Ghana to play.

Uruguay won’t be easy for the African nation though. The South American teams are street wise, and know all the tricks of the trade.

On pure footballing ability, I’d take Ghana to win this one every day. Unfortunately though, it doesn’t always just come down to football though.

Argentina are a rather large looking 9/2 with William Hill. I can only imagine that is because they have a tricky looking clash with Germany in the last 8.

Then if the Argentine’s win that, they could then face Spain in the semi-finals. This is by far the harder looking side of the draw.

If Argentina can get past the Germans, and assuming Spain beat Paraguay, I would imagine the bookies would still have the Spanish as 2nd favourites. Although I don’t think the gap in the odds will be as big as it currently is.

Spain look to have the beating of Paraguay, after looking impressive against Portugal on Tuesday. And don’t forget, we have still to see Fernando Torres anywhere near his best.

If Torres can finally get going, the Spanish will really fancy their chances in a potential semi-final against the Germans, or an Argentina team who leave the back door wide open at times.